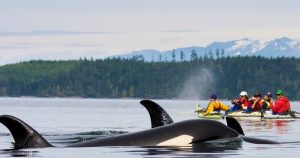 Kayaking is one of the most commonly sought-after outdoor activity by the tourists all over the world, owing to its combination of fun and adventure. According to Crystal Seas, a number of people go on a kayaking adventure so that they can get a chance to closely observe the natures’ most stunning creature, orcas, commonly known as killer whales.

Typically, you can observe the killer whales in the inland waters of Washington, as it is considered to be the most common kayaking destination. These unique creatures can be easily observed from May to October. According to an estimate, every year thousands of kayakers go to the area around the San Juan Islands in Washington to get a chance to observe the killer whales.

Although, the entire experience of kayak with killer whales sounds pretty exciting, however, it can be turn out to be pretty dangerous. This is the reason the kayakers are trained to avoid disturbing the whales and therefore must stay at least 180 meters away from killer whales. Moreover, if kayakers come in close to these creatures, they must immediately move away and avoid chasing or surrounding them.

It is therefore recommended that people planning on going kayaking must either go on a guided tour that have been especially arranged by that tourist area or they go in small groups. In case of a killer whale sighting, the kayakers are trained to form a single unit instead of spreading out so that the whale does not surround them. This will eventually avoid the incidence of any accident.